Many autistic people who are not diagnosed as a child can receive the incorrect diagnosis of borderline personality disorder (BPD) before finding out what doctors think borderline is actually autism.

So I started my research, and I looked up almost every diagnostic label you can find in the DSM, trying to look for answers. I took various online quizzes to understand why I thought and behaved in the way I did.

The first thing I somewhat related to was how borderline personality is currently conceptualised. Below is the current diagnostic criteria for BPD in DSM-5. 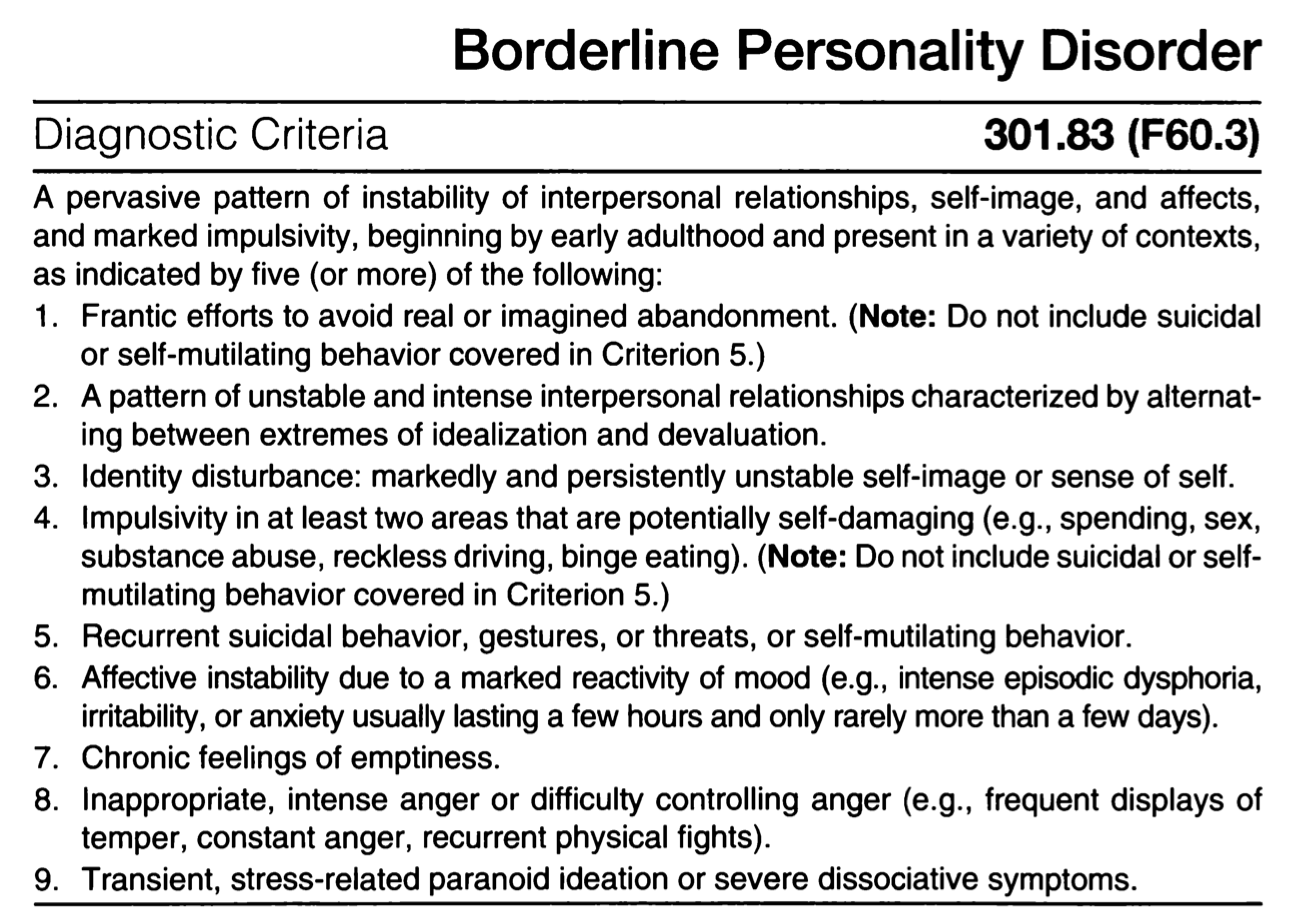 Looking at my interpersonal relationships across my lifetime, they have hardly been typical. I’ve fallen out with friends and never spoken to them again countless times, although this started way before early adulthood, around the age of 4 or 5. As I masked (pretend to be somebody I wasn’t to appear more socially acceptable by societies standards), I had very little concept of my self-identity. This is why I initially thought borderline could explain why I had no idea who I truly was. I can also be impulsive and I have been with spending and binge eating at various periods of my life.

As I mentioned earlier, I’ve experienced anxiety and depression to a debilitating level, which could be seen as affective instability by psychologists. I’ve certainly had chronic feelings of emptiness more than once, which has led to suicidal thoughts and threats.

So in total, I have six out of the nine signs, meaning I would meet the criteria for a BPD diagnosis.

So why did I come to the conclusion I was autistic and had ADHD rather than borderline?

Firstly the difficulties I was having associated with BPD had started a long time before early adulthood. The criteria implies that it starts during early adulthood; a crucial part of autism is that signs must be present in the early developmental period, which they were for me.

Secondly, many of the problems I had mentioned above came from being an autistic person with unmet needs which only exacerbated my mental health problems and suicidal threats. Now that my mental health needs are better met and I now have a better understanding of myself, this has improved for me, although I still have bad days from time to time.

In the video below, Sammy describes the fear of abandonment as a core feature of her BPD, which is something I’ve never experienced (watch from 1.52-2.15).

If anything, I didn’t want to spend time with people, and I felt more content doing activities solo during my leisure time rather than socialising. Which to my understanding is how autism can present rather than BPD. Also, BPD didn’t explain other factors, such as others misreading my facial expressions and sensitivity to sensory stimuli. Whereas autism explains this perfectly to me.

Finally, my impulsiveness is a core part of my ADHD as I have a combined profile. Like autism, ADHD is neurodevelopmental, meaning that the signs were present in childhood (or before 12 according to the DSM’s ADHD criteria). Again, this wasn’t something that started in early adulthood.

So although the conditions I have overlap with BPD, I never entirely related to BPD. This is why when I was trying to work out what was going on inside my brain, my gut reaction was to keep researching as BPD didn’t feel quite right. I kept on researching, and when I came across how autism can present differently in women and later ADHD, everything made sense. I was neurodivergent making myself ill pretending to be something I’m not 24/7.

If you enjoyed this post and would like to support my writing, I would be forever grateful if you could buy me a coffee (or tea in my case).